Credit Agricole Bank, general sponsor of the “French Spring in Ukraine”, invites you to the 15th anniversary festival. The opening of the festival will take place on 31 March at 8.30 p.m. at Sofiivska Square. The organizers will present a unique French and Ukrainian performance “The Air” combining the talents and skills of a French composer, a Luxembourg conductor, and Ukrainian director, musicians and artists.

The «French Spring» in Ukraine is a traditional festival of modern art. The aim of this event consists in cultural exchange between Ukraine and France. The programme of the festival includes art exhibitions, photo projects, murals, concerts, film screenings, performances, street shows and a job fair.

“For the fourth year in a row, we have supported the French Spring festival and acted as the general sponsor. As a bank, we see our role not only in the development of the financial market, supporting business and economy of the country. We also strongly support projects promoting the French culture and language in Ukraine and facilitating communication and cultural exchange between our countries”, - Jean-Paul Piotrowski, Chief Executive Officer of Credit Agricole Bank, commented.

During the press conference held on 12 March on the occasion of the opening of the festival, Mr. Piotrowski noted that this year’s “French Spring” is special. In the previous years, Ukrainian audience could enjoy the shows that were created and demonstrated in France, and this time the spectators will be able to watch a unique performance that was created specifically for the fifteenth anniversary of the festival. For the first time ever, Ukrainian and French artists will exercise their talents together and will offer a unique French and Ukrainian street performance “The Air” to the festival visitors. According to Mr. Piotrowski, the national motto of France – “Liberty, Equality, Fraternity” – became the keynote of the festival.

This year, the festival will be held from 31 March till 30 April in 9 cities of Ukraine (Kyiv, Berdychiv, Dnipro, Zaporizhzhia, Ivano-Frankivsk, Lviv, Odesa, Rivne and Kharkiv).

PJSC Ccredit Agricole Bank» is a modern universal bank owned by the leading financial group in Europe – Credit Agricole Group (France). The Group is a major partner of the French economy and one of the largest banking groups in Europe. It is a leading retail bank in Europe, having the largest portfolio of assets under management, being first in the field of bank insurance and third - in project financing in Europe. Credit Agricole has been operating in the financial market of Ukraine since 1993 and renders the entire range of banking services to private individuals, including premium-clients, and business. The Bank pays special attention to cooperation with agricultural enterprises. Reliability and business reputation of CREDIT AGRICOLE in Ukraine is confirmed by the highest possible FITCH ratings, leading positions in bank sustainability, bank deposit reliability and bank profitability rankings, as well as by 300 000 active private and 18 000 corporate customers, including international corporations, large Ukrainian companies and representatives of small and medium business.

Read more:
Credit Agricole is car lending leader in the rating of the Independent Association of Ukrainian Banks 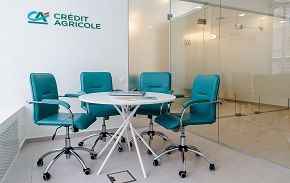