On September 27–29, IT Arena, one of the most large-scale IT conferences in Ukraine and Eastern Europe, gathered in Lviv 4 000 experts, startups, developers and all those interested in technology. It was the second year in a row that Credit Agricole Bank was the exclusive financial partner of the event and supported Startup Competition held during the conference.

“IT matters to Credit Agricole since we understand that this sector is a real driver for global technological transformation. IT generates innovative solutions that shape our future – more comfortable and user-oriented. And we are especially pleased that not only large IT companies develop actively in Ukraine, but also startups. Credit Agricole seeks to promote development of innovations, and to be a strategic partner for IT business, and a part of growing startup ecosystem in Ukraine. That’s why this year under the terms of partnership with IT Arena the representative of our bank participated in the panel of judges of the Startup Competition. And one of the competition finalists received an award from the bank – mentoring session in Le Village by CA network of startup incubators,” commented Jean-Paul Piotrowski, Chairman of the Management Board of Credit Agricole Bank.

This special prize was received by Skyworker - startup specialized in job search in IT. Boris Guitton, Head of the Digital and Innovations Department of the bank, was a member of Startup Competition’s jury and presented the winner with the certificate on the main stage of the conference.

“As for us, Startup Competition became an important part of IT Arena. Venue, quality of moderation and expertise of judges made the competition a real success. Moreover, the level of performance of startups’ representatives was impressive. Jury members were extremely satisfied with wide range of solutions and technologies showcased during those two days. We presented the certificate from Credit Agricole to Skyworker startup because its team impressed the audience with the quality of their project. They convinced us in potential capacity of the company. Credit Agricole opens for Skyworker an opportunity to participate in a mentoring session with experts of Le Village by CA during a trip to France and meet some of 500 partners involved in our ecosystem,” commented Boris Guitton, Head of the Digital and Innovations Department of Credit Agricole Bank.

Startup Competition is a key event for startups in Eastern Europe. The competition brings together the most remarkable entrepreneurs, scientists, investors and tech-fans on its stage for interviews and project defense. This year, 150 startups applied and 46 of them were selected and then presented at Startup Alley of IT Arena. 10 startups that made it to the final participated in the pitching of projects on the main stage of the conference.

Another important element of the bank’s participation in the event was a speech of Bora Kizil, an artificial intelligence expert and the co-founder of Ezakо startup, which is currently undergoing the process of incubation  in one of Le Village by CA incubators in France. On the second day of the conference, Mr. Kizil gave his speech on artificial intelligence in energy and oil industries. In addition, Credit Agricole arranged the largest lounge zone among the partners of IT Arena.

JSC “Credit Agricole Bank” is a modern universal bank owned by the leading financial group in Europe – Credit Agricole Group (France). The Group is a major partner of the French economy and one of the largest banking groups in Europe. It is a leading retail bank in Europe, having the largest portfolio of assets under management, being first in the field of ban insurance and third - in project financing in Europe. Credit Agricole has been operating in the financial market of Ukraine since 1993 and renders the entire range of banking services to private individuals, including premium-clients, and business. The bank pays special attention to cooperation with agricultural enterprises. Reliability and business reputation of Credit Agricole in Ukraine is confirmed by the highest possible FITCH ratings, leading positions in bank sustainability, bank deposit reliability and bank profitability rankings, as well as by 280 000 active private and 17 000 corporate customers, including international corporations, large Ukrainian companies and representatives of small and medium business. Credit Agricole Bank is a socially responsible bank that confirms its status by the large number of projects implemented under the Corporate Social Responsibility program “We Care!”. 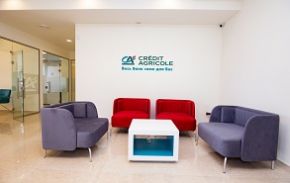 About work schedule of outlets September 17, 2021 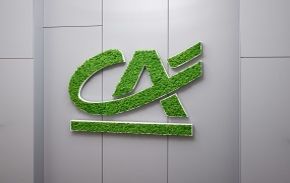