On 24 January 2017 France and Ukraine celebrated the 25th anniversary of establishing diplomatic relations. Credit Agricole Bank was honored to become a partner of a gala concert dedicated to this momentous event, held in the National Philharmonic of Ukraine. The event was hosted by the Embassy of France in Ukraine and the French Institute in Ukraine. The Academic Symphony Orchestra under the Principal Conductor Mykola Dyadyura and French Soloist Yan Levionnois (cello) performed musical compositions of French and Ukrainian composers: Myroslav Skoryk, Eduard Lalo and Camille Saint-Saëns. Such combination symbolizes the ties between Ukraine and France.

«Credit Agricole Bank is proud of being one of the companies that have been supporting the development of France-Ukraine economic relations, supporting and affording chances to Ukrainian business for many years now. We believe that a part of our role as a French bank is to participate in the promotion of French culture in Ukraine and intensify cultural exchange between our peoples. By encouraging different cultural projects we offer the Ukrainians opportunity to join French art in all its forms. I am confident that fruitful cooperation between our countries, which has lasted for 25 years now, will continue to strengthen», - Jean-Paul Piotrowski, CEO of Credit Agricole Bank, said.

On 24 January 1992 the Minister of Foreign Affairs of France, Roland Dumas, made official visit to Ukraine which had recently gained its independence, where he signed the Intergovernmental Protocol on the Establishment of Diplomatic Relations between two countries.

Since then, France and Ukraine have been developing the relationships that deepen as the years go by. These ties has become more close owing to the Maidan Revolution, when the French Minister of Foreign Affairs Laurent Fabius attended Ukraine to hear demands of the people and try to reconcile the conflicting parties. After the annexation of the Crimea and the war in Donbas started, France has reaffirmed once again its support to Ukraine and integrity of Ukrainian territory by hosting the first «Normandy format» meeting on 6 June 2014. Numerous meetings that were held ever since enabled the signing of the Minsk Agreement. Today as well as over these 25 years, France stands shoulder to shoulder with Ukraine providing it with support to execute the Agreement and implement the reforms.

Every year, French and Ukrainian universities carry out student exchange programs and scientists of the two countries implement joint research project. More than 200 000 of the Ukrainians study the French language in schools and universities as well as in the offices of the Alliances françaises network and the French Institute in Ukraine. Among other things, these institutions popularize French culture. It can be attested as well by the success of the French Spring Festival in Ukraine being held in Kyiv and other cities of Ukraine every year and which, by the way, for a couple of years has been sponsored by Credit Agricole Bank as a general partner. And definitely, France supplies support both financial and training in security industry. 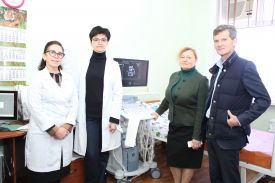